Critically Endangered: How Many Bornean Orangutans Are Left?

Home/Critically Endangered: How Many Bornean Orangutans Are Left?

Critically Endangered: How Many Bornean Orangutans Are Left?

Just 20 years ago, it would have been difficult to pinpoint how many orangutans were left in the wild. Fast forward to today and their status is clear: Bornean orangutans are now classed as critically endangered orangutans.

Habitat loss and poaching has left the Bornean orangutans struggling to reproduce fast enough to make up for the fallen numbers. This effect has been so drastic, experts claim the orangutan has just 10 years before they’re declared extinct. The latest numbers show there are only 104,700 left in Borneo and just 13,846 in Sumatra.

To illustrate the scale of the emergency in Borneo, this number represents almost 55% decrease in population from 230,000 individuals just ten years ago – and is projected to decline further to 47,000 individuals by 2025.

How on earth could this have happened? 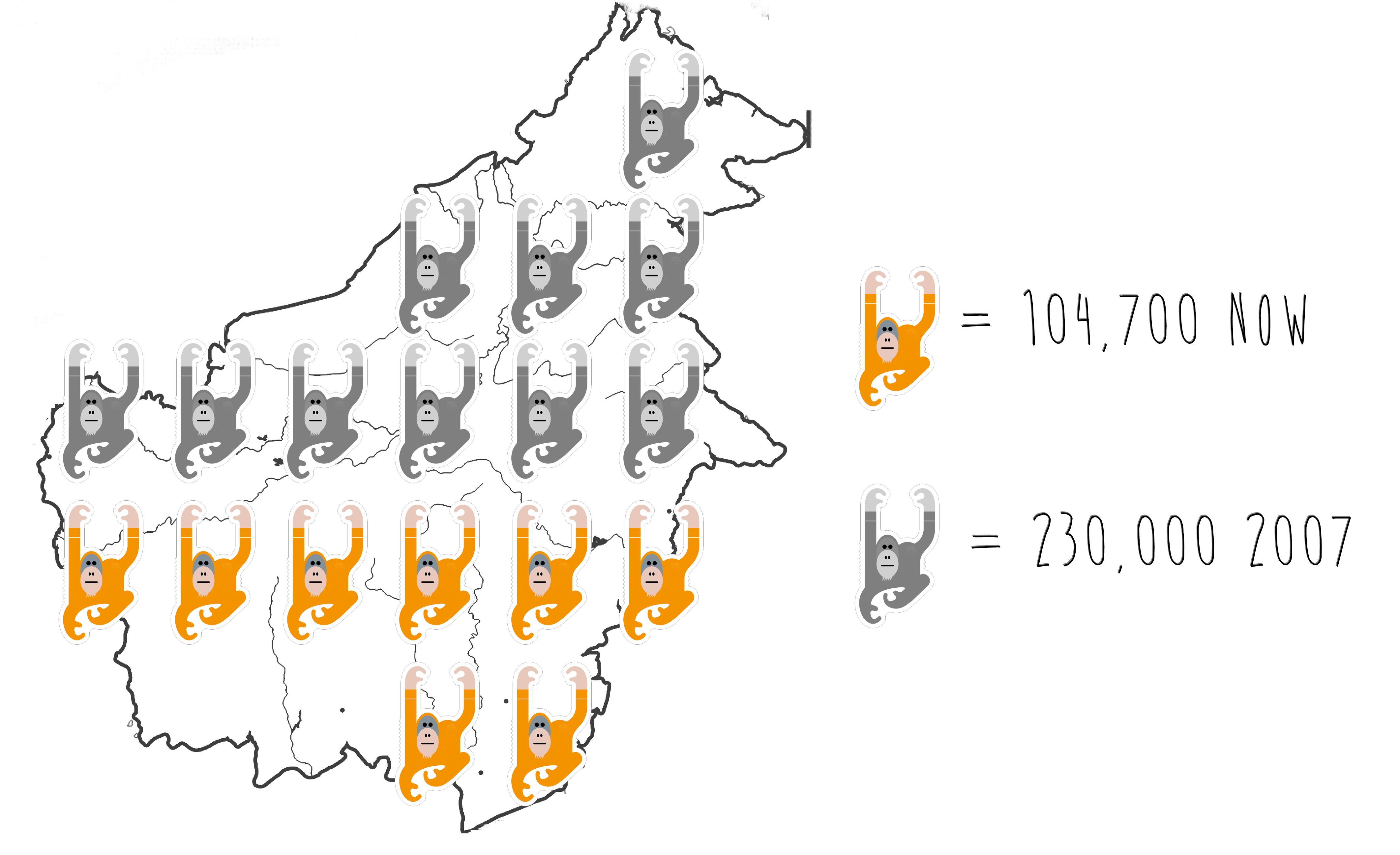 The most notorious cause of habitat loss is the clearing of Borneo’s forests to farm palm oil. The boom in demand for palm oil is understandable. It’s cheap, nutritious and can be used in a range of products, from food to household cleaning. Where there’s demand, there is supply; in a low socio-economic country like Borneo, this can be largely unregulated. As a result, illegal palm oil farming has run rampant, which leaves every creature who depends on the rainforests at a loss. Over the last 20 years, 80% of the orangutan’s habitat has been destroyed.

Orangutans are hunted as a source of food, in defence of agriculture and sometimes even for sport. While the official position of Borneo’s government is that hunting orangutans for sport and food is illegal, the blurred lines between provinces result in poachers that aren’t reprimanded and local governments that fail to set an example.

It’s difficult to pinpoint exactly how many orangutans are lost each year from illegal hunting but considering the other threats orangutans face, it’s an unnecessary blow to the struggling species.

If you’ve ever seen an orangutan outside of Borneo and Sumatra, docile and willing to play with tourists, chances are it’s there illegally. Orangutans are popular throughout the world and their distinctive orange hair and cheeky personalities draw visitors in by the hundreds. They’re held captive in parks disguised as sanctuaries and rehabilitation centres, or even in people’s homes as household pets.

Trading laws have tightened in recent years, but there are still an estimated 1000 orangutans smuggled out of Indonesia each year. This threat is particularly dangerous because when the prize baby orangutans are taken, their territorial mothers are often killed while trying to protect them.

All of these factors have contributed to the dwindling orangutan population. It’s clear Borneo needs stricter law enforcement and better education to slow their rate of extinction – but where are we in the fight for the orangutan’s lives?

Progress is hard to measure when the orangutan population has sustained such a heavy blow. Orangutans are slow breeders and highly emotional. Being relocated or separated from their family can leave a female orangutan unwilling to breed again, instead wishing to isolate themselves from the typical regime.

With this in mind, the greatest mission for conservationists has been to protect the remaining jungles in Borneo. Protected land is (mostly) safe from poachers and farmers, and can be monitored for illegal activity. One of the biggest orangutan foundations, The Orangutan Project created their Orangutan Habitat Protection program to raise money for Wildlife Protection Units who patrol protected forests.

In Borneo, volunteer groups also patrol the forest for poachers and loggers.

Orangutan Trekking Tours’ founder Bain, is part of Borneo’s Green Team, whose mission is simple: raise money to buy land and protect it from being sold to corporations who want to use it to farm palm oil. The Green Team mostly work with local farmers, trying to reach them before bigger companies with more money do.

Every member of the Green Team helps raise awareness in different ways – through trekking tours, volunteering and working with various NFPs.

The Roundtable on Sustainable Palm Oil or RSPO was formed with an aim to make sustainable palm oil farming the national standard. No small feat! The RSPO takes into consideration the fact that palm oil is a fantastic product and industry – when produced without harming natural habitats, impacting local culture and history, or endangering entire species. They do this by:

Borneo’s government isn’t entirely blame-free in the orangutan’s declining status, but it has put important initiatives into action in response. While the RSPO isn’t a government initiative, the government has certified it and encourages all palm oil farmers to abide by the standard it sets. It’s been a battle for Borneo’s government, as the palm oil boom brought prosperity to a lot of the previously struggling population. Watch this video for an in-depth look at the perspective of governing figures, local villagers and palm oil farmers.

Even with the influx of trade, the government has come to terms that the money isn’t worth the forest. Their commitment to reducing the damage caused by palm oil farming can be seen in their effort to litigate control – the Indonesian President Joko Widodo famously banned palm oil farming in areas that had been cleared by fire. This was a landmark decision, as the areas had been cleared for the purpose of planting more palms to farm. President Jokowi since ruled that the 2 million cleared hectares be restored back to their original ecosystems.

Worldwide Not For Profits making a real difference

Orangutans are incredible and unique creatures, whose popularity has encouraged the media to shed much needed light on the situation throughout the world. This attention has made conservation efforts easier, with more people interested in volunteering and raising money to help the cause.

One powerful player in the fight against unsustainable palm oil is the NFP Palm Oil Investigations, who’re dedicated to making people aware of their choice to support palm oil farming in their everyday consumer decisions.

What will it take to save the orangutans? YOU CAN MAKE A DIFFERENCE!

Even with every effort to rewind the last 20 years of damage, the population of orangutans continues to shrink. We continue to ask: how many critically endangered  orangutans are left? Can we save them? How long do we have?

Your impact may be great or small, but the situation is delicate enough for it to matter.

If you would like to support Arbain and the Green Team’s mission to buy and protect land from palm oil farming – visit Borneo. Trek with Arbain and Orangutan Trekking Tours and partake in one of the best things to do in Borneo. Meet the orangutans at Camp Leaky and the people who care for them. It all contributes to Arbain’s mission to conserve and rehabilitate Borneo’s most precious natural resources, so animals like the orangutan have a better chance at a future and people from all over can experience the beauty of Borneo’s wild.

Start by supporting us by sharing this blog around.